Mbwana Ally Samatta became the first Tanzanian in the Premier League when Aston Villa took him from KRC Genk in January 2020.

The striker managed two goals in 16 matches in all competitions for Dean Smith’s side in the second half of the 2019/20 season.

In the summer of 2020, the English club allowed the 28-year-old to join Fenerbahçe on a loan deal and his stay there was made permanent earlier this year. He returned to Belgium in the last window when Royal Antwerp took him on a temporary deal on deadline day.

Samatta has given a lengthy interview to Het Laatste Nieuws and the majority of the coverage is focused on his time spent at Villa Park.

Although he had the “perfect start” to his life in England, things didn’t work out in the long run and Aston Villa had to cut ties with the player. The player doesn’t regret joining Smith’s side and expressed his unhappiness over not being relied upon last season.

“No [I don’t regret]. You can put me in a time machine and say: ‘Two months after you leave corona breaks out and you have to sit inside for three months’. I would make the exact same choice. It’s the Premier League, man,” he said.

This led HLN to press as to why he left Villa for Fenerbahçe in 2020. Responding to that, Samatta explained: “I actually didn’t want to leave Aston Villa. I thought I could do something for the club. But a lot had changed in a short time. There was a new sports director, as well as a new board.

“They wanted to give the team a new face. And there was no place for me in that. Could I stay? Yes. I just didn’t want to force anything. A footballer doesn’t feel like sitting in the stands every week.” 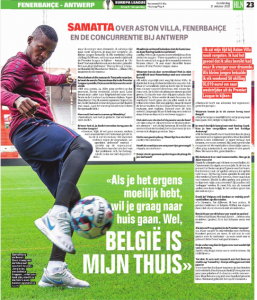 “It was painful, but I had to make the choice. And then came Fenerbahçe. A top team, with top fans. Known all over the world.”

When quizzed if he still fancies a future move to the Premier League, he said: “Yes, but now I give myself completely for Antwerp. One hundred percent and more. I don’t want to talk too much about the future – you never know what will happen. I live for what is to come.”