Back in January, Newcastle United, in search of a left-back, made a bid for Rennes left-back Faitout Maouassa, currently on loan at Nimes.

The offered was confirmed by both the club’s director of football (without revealing the Magpies’ name) and then the player himself a bit later in L’Equipe.

Explaining he was ‘shocked’ by the interest from a Premier League club at the time, the young defender, who has continued to feature regularly for the Ligue 1 surprise package (currently 12th), sat down for an interview with Midi-Libre recently, where he discussed the January offer once more.

He said: “Rennes rejected the offer from the Magpies, but I didn’t want to leave anyways. Here, in Nimes, there is a good group, good lads. I really wanted to finish the season with them.” 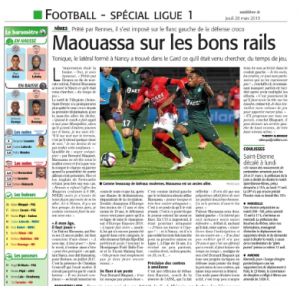 Since the option to go to Newcastle was never really given to him, as it seems Rennes have plans for him going forward, the youngster will finish the season in the south of France.

Instead of Maouassa, Newcastle went the safe route and loaned Antonio Barreca from Monaco, who has only featured for four minutes.

If anything, the 20-year-old has dodged a bullet if that is all the time the Magpies and Rafa Benitez were going to give him, as he’s made it clear that time on the pitch is what he needs.

The same will apply next season, meaning that if Newcastle do come back in the summer, they will need to make some guarantees that they will play him regularly to convince him.