After a tough period at QPR, Paulo Sousa was quickly back in the management game when Swansea City offered him the chance to take over from Roberto Martinez.

He grasped it, agreeing a three year deal, and had a great season with the Welsh club. Swansea finished the highest they had in 27 years, although they missed out on the play-offs in seventh position.

That achievement brought attention from elsewhere, namely Leicester City. Instead of staying at Swansea and building on the progress and success of the first campaign, Sousa decided to jump ship.

He didn’t find all at Leicester that he was looking for. Less than three months in, and with one win out of nine, he was fired.

Now manager of Bordeaux, having taken over at the French club earlier this month, Sousa has been speaking to L’Equipe about his career.

Asked about finding football different in the UK, the French newspaper put it to Sousa that it took him three jobs to realise: “Yes because at the first (QPR), I was the eleventh coach named by the owner. The second, (Swansea), I didn’t make the right decision when leaving. 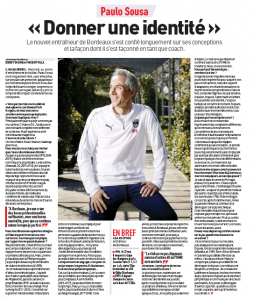 “We had the club’s best results for twenty-seven years and we missed out by a point on the Premier League play-offs. When the Leicester proposal arrived, there was a story, better working conditions too. But the club was sold after three months and more decisions were made.”

Sousa will never know what would have happened had he stayed at Swansea, but he then went on to manage Videoton, Maccabi Tel Aviv, Basel, Fiorentina and Tianjin Tianhai before ending up in France.