Mario Pasalic is increasingly a star player for Atalanta, and that means his future is being debated repeatedly in the Italian media.

Owned by Chelsea since the Blues signed him from Hajduk Split in 2014, the 24 year old is now on his fifth loan spell away from the Premier League.

First he was sent to Elche, and then had periods at AS Monaco, AC Milan and Spartak Moscow, before finding himself in Bergamo.

His first season at Atalanta wasn’t as impressive as this one could be, and the club debated over whether to bring him back from Chelsea. They’ll be glad they decided to do so, and repeat reports in Italy claim the Serie A club have a €15m purchase option.

Atalanta can also extend the loan by a further season, with Pasalic’s Chelsea contract lasting until June 2022.

He’s been speaking to Croatian newspaper 24Sata and made it clear he’s happy to finally have some continuity, and would prefer to continue where he is rather than go out on the road again. 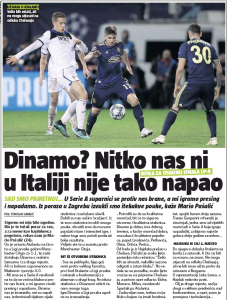 Pasalic explained: “I would like to settle down, play in the same club for a few seasons. I am satisfied, I needed a club in which I would have continuity, to combine at least two seasons. Coach Gasperini is a top expert, we are one of the few Serie A teams to play offensively.

“I can’t influence Chelsea’s decision, but I wouldn’t mind staying in Bergamo.”

Should that €15m clause exist, and Pasalic continue his current form, then it’s quite possible Chelsea won’t have any say in it.