Zirkzee has been with Bayern since joining from Feyenoord youth in August 2017 in a £135,000 deal.

He’s since worked his way up the youth ranks at the German club before becoming making his debut under Hansi Flick in December 2019.

Since then, he’s been sent out on loan at both Parma and now Anderlecht, where the 20-year-old is hoping to get the regular game time to continue his development.

The Dutchman is predicted to have a bright future and has certainly demonstrated he is capable of doing so in his time with Bayern so far.

It’s well established that things could have been very different for him, though, as he had a spell with Everton before his move to Munich. 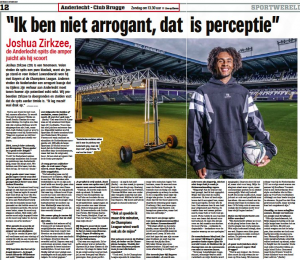 The Blues were keen on him as a youngster and signed him to a trial before Zirkzee eventually broke that and decided to move to Germany instead.

It’s a situation he’s spoken about before in the past, and he’s done so again in an interview with Het Nieuwsblad.

“I finished the season at Feyenoord and looked at the possibilities,” he said.

“Ronald Koeman was Everton’s coach at the time, so as a Dutchman, I thought I would get more attention there.

“However, I cancelled Everton myself. Bayern also came to scout me, but just then, I played two lesser matches.

“I then said myself: Invite me for some test training, and I will convince you. That’s how it went.”