Home Europe “I can make my own story” – Diogo Dalot speaks to Portuguese...
SHARE

Manchester United fullback Diogo Dalot is on the front page of Portuguese newspaper A Bola this Tuesday.

The 20-year-old has given the outlet a six-page interview, talking a lot about his move to the Premier League side and his first season in a different country.

Dalot has been pretty generic when trying to avoid questions which compared José Mourinho to Ole Gunnar Solskjaer, or even when asked why are Manchester City and Liverpool above Manchester United in the Premier League table.

Still, the player was very sincere about the life he’s been having in Manchester, claiming that he never had problems when joining a squad full of stars.

“It’s an interesting experience,” Diogo Dalot told A Bola. “If all the players could go through this, it would be very good for them. There are positive and negative things like everything in life. But for me, it has been fascinating to be with players and coaches who have experienced and already achieved a lot. It only makes me mature. We must distinguish what is bad from what is good and act the best we can.

“There is certainly no script that we have to follow, interpret or fulfil to get here and make ourselves known. In my case, it was to arrive and… be myself, as it was in Porto. With all the humility and the work I do, my concern was to show them that it was one more that was here to help and to win.”

Asked if he had to do things like tell Paul Pogba ‘Hi, I’m here, I’m Diogo Dalot’, the player had a laugh and said things don’t happen this way at the club.

“No, no. Manchester United’s dressing room is fantastic, with players from many countries, created in different cultures in every respect, and I was received in the best way. Of course I had help from José Mourinho and all the Portuguese staff, as well as the Brazilian players, which makes everything easier on the communication level, even though I do well in English. The adaptation was good, quiet and, above all, progressive.” 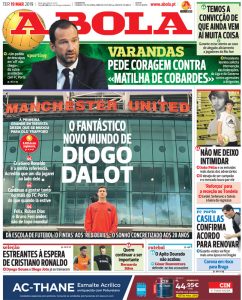 Asked if he’s making a lot of money, Dalot had a laugh again, and admitted he got a big pay raise when leaving Porto for Manchester United.

“You make, you make a lot of money. Not the most important to me at this point, but as everyone can imagine Manchester United are a very powerful club, also financially. The reality is this: there are Manchester United, Real Madrid, Barcelona and all the other clubs appear below.

“And it really wasn’t the most relevant thing. People may not believe it, but that’s the truth. There was a lot of coverage for what I was going to make, but what seduced me most was the sports project, the chance to join the elite, to be part of a club like there are very few in the world. Whoever works and lives with me knows that this is the truth. Of course, I am not a hypocrite to the point of saying that money matters nothing. If I said it, I’d be lying, because the financial part helps a lot. Helps me and my family.”

And among the friends Dalot has in the squad, there are the former Benfica players Victor Lindelof and Nemanja Matic, who both talk about Portuguese football with him: “We talk a lot about what happens in the league, because Victor and Nemanja always want Benfica to win and I want Porto to win.”

In the interview, Dalot has shown to be a big Cristiano Ronaldo fan. There was a quick Q&A about some of the players who he admires, and the Portuguese legend got mentioned twice, when Dalot was asked about ‘best right winger and player who he’d like to play with’.

When asked about following Ronaldo’s steps at Old Trafford, Dalot claims not to feel the pressure of it: “I do not consider it to be an inheritance. It is, first of all, a privilege to be one of the five Portuguese who represented United. There are not many, so everything is more special. What Ronaldo did here is guarded, no one can stir or alter. It was a beautiful page in the history of the club and I hope one day I can make my own story.”

Player’s father confirms offer from Brighton, says work permit could be an issue