Home Europe “I can imagine it a lot” – Bundesliga star quizzed on signing...
SHARE

After being linked to Tottenham Hotspur for more than a year, Liverpool and Manchester United have now reporedtly joined Spurs in chasing Marcel Sabitzer.

His contract with RB Leipzig will expire in 2022 and within the club, they believe the midfielder doesn’t have plans to sign an extension.

At the start of this week, Bild reported the 27-year-old’s ‘goal’ is to move the Premier League, where the Reds and Ole Gunnar Solskjaer’s side, along with Tottenham, want him.

With clubs continuing to be linked with the Austria international, the player has been asked about it.

Kicker asked if he would prefer to play for ‘traditional clubs like Bayern Munich, Real Madrid, Liverpool or Manchester United?’ Responding to that, the midfielder said: “I can imagine it a lot.”

Meanwhile, Julian Nagelsmann has tweaked Sabitzer’s role from an offensive position to a defensive one. 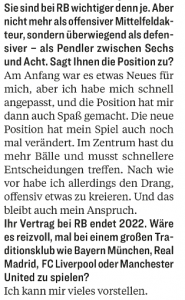 Asked if the new role suits him, the player explained: “I enjoyed the position. The new position also changed my game again.”

“In the centre, you will receive the ball more and you have to make faster decisions. However, I still have the urge to create something offensively.”