Prior to this season, the name Victor Osimhen won’t have meant a lot to most football fans outside of Europe’s top five leagues, but the Nigeria international’s displays for Lille since his summer move have caught the eye of many in recent weeks.

With six goals and two assists to his name in his first eight Ligue 1 games, the 20-year-old is showing exactly why the French side chose him to help fill the goalscoring void left by Nicolas Pépé’s move to Arsenal.

Still playing in Nigeria in 2017 at the Ultimate Strikers Academy before Wolfsburg bought him, the youngster’s rise has been incredible, driven by a desire that hit him in the face around the age of nine, quite literally, when watching Chelsea play against Manchester United.

In a long interview with France Football, Osimhen was asked if he ever got to watch football games when living in Lagos, Nigeria.

He said: “I watched the Champions League. I remember of a Chelsea-Manchester United final. I wasn’t really for anyone in particular, but when Terry missed his penalty… I was so annoyed that I ran out of the bar. A lady was opening the door at the same time. Smash! I took it straight to the face. 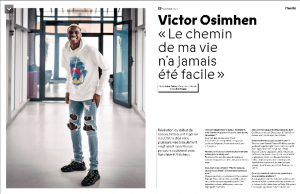 “I bled a lot. My eyelid was split open… (laughs). I was telling myself, when they were putting stitches in: ‘If I don’t become a professional footballer with the passion I have for this game, I will never forgive myself…’ The road has been a long one.”

No one ever knows what the future is made of, and it remains to be seen how many years the young forward will stay at Lille, who are happy to sell players to the highest bidder if it suits them

However, if he does ever end up leading the line at either Chelsea or Manchester United in the future, then perhaps fate truly is inexorable and he was destined from that very moment to turn out for one of the two Premier League sides.

We will have to wait and see.