Kevin De Bruyne isn’t afraid of being outspoken when it comes to the Belgium national team. The country’s golden generation haven’t yet to come close to showing their best at a major tournament and the World Cup in Russia brings with it a pressure to perform.

After the friendly against Mexico the Manchester City player made his feelings very clear by saying: “We are still living too much on talent. As long as there is no good system tactically we will continue to have problems against countries like Mexico. It is unfortunate that we have not found a solution so far.”

Those comments weren’t simply a heat of the moment thing and rather than back away from them, De Bruyne has doubled down and still insists it’s a problem which needs sorting out.

In quotes carried by Het Belang van Limburg on Thursday, the Manchester City player has continued to make his point.

Asked if he was surprised by the reaction to earlier his comments, De Bruyne said: “No, I knew what the consequences were going to be. Immediately after that interview I called my agent Patrick De Koster. I said to him: Keep yourself ready, I have said what I had to say.”

Roberto Martinez countered that whilst De Bruyne is entitled to an opinion, he shouldn’t have said what he did in public, to which the Manchester City player has replied: “I do not regret what I said. I have taken my responsibility and I accept the consequences. No one in the group has refuted my words. The other players were only surprised by the way I expressed my anxiety. But I did it to help the team.

“I really want everyone to be at their best for the World Cup. Because of my status, I can afford to speak. I have more to say than the younger players. And I insist that to win the World Cup everything has to be perfect. I want to wake everyone up so that we do not make the same mistakes as at the European Championships in France.”

Asked if Belgium could play like Manchester City, De Bruyne said: “That is almost impossible. First, the coach has his own ideas. Secondly, the players must be able to execute the system. Every Red Devil plays in his club in a different system. And thirdly, at City we have time to sharpen our game system. At the Devils we have one or two weeks to train. That is too little.

“We have to create our own system. The guidelines must be clear, so that everyone is pointing in the same direction. So that I do not walk forward and another person backwards. It is up to the coach to put things in order. I am confident that he can.”

On whether he shares the Belgian media’s panic that he may be injured before the World Cup, the City star explained: “I do not feel really targeted by the opponents. Tackles are part of football. I do not cry when I’m hit. I bite my teeth and I continue. With or without pain. Football is simply a contact sport.” 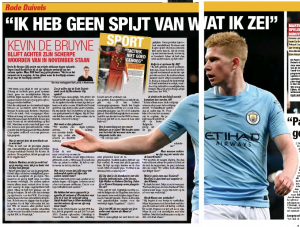 Asked whether the World Cup could be a chance to measure himself against Messi and Ronaldo, De Bruyne disagreed: “It is impossible to compare me with them. Our positions are completely different. They are much higher on the pitch and score ten times more than me. If I make ten in a season, they score a hundred. But then I have other tasks on the pitch.”