On Sunday we covered a claim from Italy that Everton have a ‘concrete’ interest in Justin Kluivert. Manchester United were also linked but given the Red Devils are linked with nearly every young talent, it wasn’t as interesting as the Toffees claims.

TMW stated that, after a family disagreement over who should represent him in negotiations with Ajax, and potentially other clubs, the youngster took his mother’s advice and went with Mino Raiola.

Therefore, claims building in Italy would be no surprise. Raiola may be Dutch born but he’s certainly taken on his Italian heritage.

Monday sees articles across the Dutch media which show just what a mess the situation could be turning into.

De Telegraaf, in a big article, state Ajax are going to be ‘straight’ with Raiola, and tell him they’re not interested in a sale and want to build a strong team. Talks for a new contract are said to have been ongoing for nine months.

Kluivert’s deal ends in June 2019, and that puts Ajax under some pressure, something Raiola will be well aware of, and, like any agent, use to his client’s advantage.

The agent’s demands are: 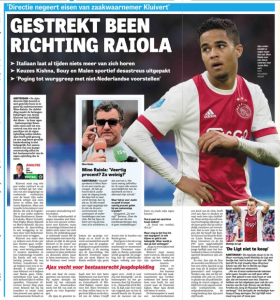 De Telegraaf point out this means that if Kluivert is sold for €40m, both player and agent would get €8m each and Ajax the remaining €24m.

It’s too much for Ajax who ‘want to be tough’ (and probably more so, want to look to be tough). The club’s financial director Jeroen Slop has a policy of not agreeing to more than 10% as a combined kickback for both players and agents, and ‘will not make an exception’.

Should Raiola not move towards Ajax then it will be assumed Kluivert isn’t renewing, with the possibility he’d be frozen out before a free exit next summer. The Dutch newspaper say there’s a good chance the youngster has no idea what demands Raiola has made, and Kluivert is on record saying he sees himself at Ajax next season.

Another Dutch newspaper, Algemeen Dagblad, reports along a similar theme.

They say Raiola is working with interest from Manchester United. It’s not stated, but there’s every chance the agent is using his Old Trafford connections to pressure Ajax. 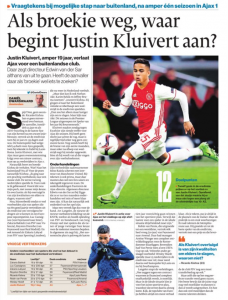 AD sound a little more pessimistic about a stay, and say the way things are going a transfer could look ‘obvious’. Ajax are ‘frustrated’ with how negotiations are going and don’t want to give too much power over to an agent. Edwin van der Sar made this publicly clear over the weekend, hinting at a potential exit.

Kluivert, a winger, has scored 12 league goals so far, but AD point out only one of those has come against a team in the Eredivisie’s top ten.

From an Everton perspective, if the interest is real then this is a tricky one to get into. There’s every chance they could be used to pressure Ajax further or find themselves trying to agree a deal for a player ostracised at his club.

Kluivert has the hype, he certainly has the name, and may well go on to great things, but the insinuation from the Dutch media is he, led by Raiola, may be getting ahead of himself.

Moving to the Premier League this summer could see him take a step backwards.