Manchester United beat Real Sociedad 4-0 in Turin on Thursday evening, and now look very well placed to progress to the next round of the Europa League.

The result, and the dominance from Ole Gunnar Solskjaer’s side, surprised many who had expected the tie against La Real to be much more difficult than it turned out to be.

There’s some criticism going the way of the Basque side in Friday’s Spanish media, yet that’s accompanied by a lot of praise for Manchester United.

AS state: ‘Real Sociedad was hit by a hurricane called Manchester United at the Juventus Stadium in Turin and is practically eliminated from the Europa League.’

They go on to say the La Liga side were given a ‘painful and severe thrashing’, and it was a ‘reality-check’ which showed Real Sociedad just how far they have to go to be competitive at this stage of European competition: ‘Manchester brought them back to harsh reality and showed him what powerful teams do in Europe.’ 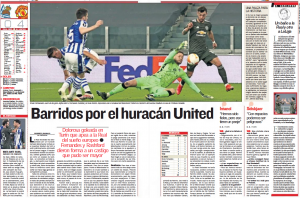 In an opinion column, an AS journalist states: ‘The United forwards looked like gazelles free across the African savannah every time they ran, while Real Sociedad defenders followed as if they were riding behind in a smoking Seat 600.’

Sport report Bruno Fernandes was the ‘conductor’ of the performance, and they grade him 9/10 for the match. Daniel James and Marcus Rashford are given 8.