Alfred N’Diaye was one of Hull City’s end of window signings, with Marco Silva seeing what he could pick up from other club’s scraps around Europe.

N’Diaye had joined Villarreal from Real Betis last summer, but the midfielder had failed to have the impact desired, and therefore was available in January.

Silva and Hull swooped, and somehow the Portuguese manager has got his ramshackle squad moulded into what looks something like a pretty good team. The manager deserves a great deal of credit, having seen important players leave, and others succumb to injuries, he’s just got on with things to the benefit of Hull. 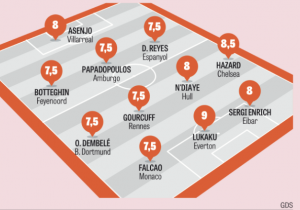 The manager’s early career at Estoril will have helped foster the need to look for bargains, and that Silva is being linked, albeit weakly, with Sporting Lisbon in Portugal shows the respect there for his abilities.

N’Diaye has hit the ground running having been plucked from Villarreal by Silva, and his performance and goal against Liverpool has seen him picked out by Gazzetta dello Sport. Each week the famous old Italian newspaper pick out a selection of players from around Europe, ignoring their own Serie A, and N’Diaye has found his way in.

It’s not been often this season that a Hull City player has received recognition on a European level.