According to Posta, Fenerbahce are keen to sign Hull City midfielder Markus Henriksen before the close of the Turkish transfer window on August 31st.

The Turkish giants are still in the market for a midfielder this summer, and they’ve already been linked with moves for Benfica’s Ljubomir Fejsa.

Posta say Henriksen has emerged as a ‘surprise target’ for the Yellow Canaries and they are now seriously considering making an offer for the 27-year-old.

According to the Turkish newspaper, Fenerbahce have already offered €3m for Henriksen, but Hull City are demanding at least €5m for the midfielder. 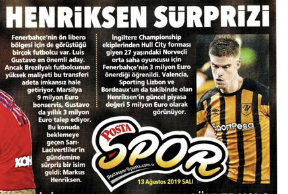 Fenerbahce are not the only interested party in the Tigers’ midfielder, with it also claimed that French side Bordeaux are keen on signing the player.

Henriksen, who played for AZ Alkmaar before joining Hull in 2016, only has a year left on his current deal and new manager Grant McCann has made it clear he is not part of his plans for this coming season.