Home Europe Hull City may need to be cautious with injury should they return...
SHARE

Nicolas Nkoulou was one of many players linked with Hull City during the winter transfer window. Marco Silva was tasked with coming in and improving his squad on a budget, with the dream of keeping Hull City in the Premier League.

Silva has done a remarkable job at Hull City and Premier League survival is looking a good bet. That means the club will be able to return for some of the targets they missed during January.

Should Nkoulou be one of those, then Hull need to be cautious over the player’s fitness situation. French newspaper report on Tuesday that Lyon have had serious concerns over Nkoulou, which is why they looked kindly on a Hull winter transfer, but the player wasn’t keen. 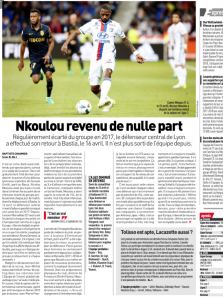 Since then Nkoulou has turned things around, and his form would surely impress Hull and others. Therefore, returning in the summer may not be such a bad idea, especially if Lyon are still nervous about the player’s future.

Should Silva make the choice to return for Nkoulou then the player’s fitness situation will need deeply looking into. A poor recovery from previous knee surgery had left Lyon worried enough to consider a sale, if the French club consider it again, then it’s likely a telling message.