It’s time for Hull City to be the latest English club to be linked to Sporting left-back Marvin Zeegelaar.

After the departure of manager Marco Silva, Portuguese newspaper A Bola shows up with a story today saying Hull have shown their interest in signing the 26-year-old.

But despite the desire, Hull still haven’t made an official bid. The story doesn’t point out when they are expected to do so. 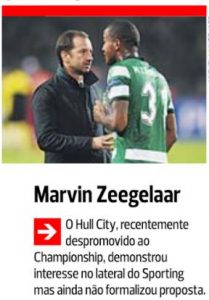 There was a very interesting story about Marvin Zeegelaar from January. It was claimed that Norwich City had reached an agreement with Sporting for the transfer, but the player did not accept to move.

Portuguese outlets claimed Norwich were offering €3.75m plus €500k in bonuses, but Zeegelaar actually wanted a destination with ‘bigger aspirations’, which probably means a first division side.

The Dutchman even managed to get 18 starts in the Portuguese league this season, but it’s no secret that Sporting are willing to sell some of their many left-backs, and Zeegelaar should be one of them.

A deal with the Portuguese side isn’t hard to be found. Hull City’s problem will be convincing the player, as Norwich City found out.