Tottenham goalkeeper Hugo Lloris has admitted it was ‘hard’ to watch Mauricio Pochettino leave the club.

Pochettino’s five years in charge came to an end in the middle of November, with Spurs chairman Daniel Levy electing to make a change after seeing his team win just five games all season.

It brought an end to a successful spell at the club, with Tottenham having managed to finish in the top four in four of his five years, as well as reach the Champions League final.

Lloris was a stalwart under the Argentine, making 229 appearances for him in total, the most he has made for any manager.

And he admits it wasn’t nice to see Pochettino leaving the club given the relationship they have built over the years.

“It’s not nice to see people you really like leaving, and with whom you’re connected.

“But we also know that that’s part of football and you don’t have a say as a player, you have to put yourself immediately at the service of the new coach.

“After five and a half years together, we understood each other with our eyes closed. Now you have to get to know each other. But with top-level people, it happens quickly.”

Tottenham did not waste any time in replacing Pochettino, with José Mourinho hired almost straight after his sacking.

The arrival of the Portuguese manager has seen a complete change in direction at the club, with his approach very different from that of Pochettino.

Lloris says that there has undoubtedly been a change in direction, but his first contact with Mourinho went well.

“It’s a different approach. But I’m taking a positive approach to that, too,” he added. 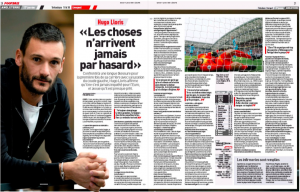 “We had met on the Premier League pitches, but it’s the first time we’ve spoken in such depth. I’m finding out.

“It’s still an opportunity for us players to be in daily contact with one of the greatest coaches of the last 20 years, who’s won everywhere.

“He has a very specific mission, which is to go out and get what we’re missing: a trophy. It’s a continuation of what we’ve done in recent years.”