Home Europe Hughes with chance to put Stoke City’s money where his mouth is,...
SHARE

When Jese Rodriguez scored the winner for Stoke City against Arsenal, it looked like he could be set for a great season.

Stoke City had hyped up the transfer beyond any reason. Jese had failed spectacularly at PSG, and having arrived at Las Palmas last season like a rockstar, he pretty much failed there too.

PSG would have much preferred Jese to go to Middlesbrough over Las Palmas, with the English club, for reasons known only unto themselves, said to be offering a better deal, but the footballer was insistent he’d be the star on his Canary Island.

Six games since the Arsenal match have seen no goals, but one assist, and a whole bunch of average performances. Jese has understandable issues in his personal life, with his son born premature, but on the pitch the performances haven’t been a surprise, given it’s followed the familar pattern of his career. 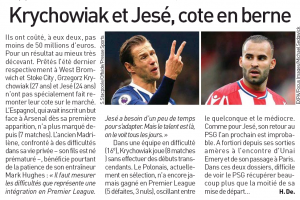 Monday’s edition of L’Equipe has a big feature on PSG and FFP, and scrambling around to find money for the French club, they land upon Jese.

PSG will find it difficult to ‘recover much more than half’ of their outlay on the Spaniard, which suggests Mark Hughes could be in for something he’d feel is a bargain. The Stoke manager has repeatedly backed the forward, and will have the opportunity to pressure his club into backing that up with a transfer fee.

The French club paid €25m, and regretted it almost instantly. If L’Equipe are right, something in the region of €15m could do it, and PSG will be happy to add the money to their FFP pot.