Home Europe Huge offer from West Ham claimed, despite player being ‘not for sale’
SHARE

When you see the length of the story attached below, you’ll certainly think that Tuttosport has a lot to say about West Ham’s chase for Andrea Belotti.

But as they usually do, there’s 90% of Italian poetry, with a slight part of the article actually reporting that West Ham United made a bid for the striker.

Tuttosport claims that Manuel Pellegrini is a big fan of Belotti’s skills, and would like to have him in the squad to take the place of Marko Arnautovic.

It’s said that West Ham have made a first bid of €60m for the player, but Torino’s answer was that he’s not for sale. 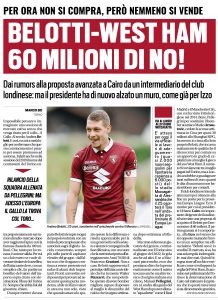 Tuttosport doesn’t rule out a move. They say you can never say never in the transfer market, and things should depend on how things will develop from now on.

But it’s made pretty clear that Belotti is a man of a lot of importance in Turin, and Torino won’t accept much less than his €100m release clause.