When ESPN reported Everton’s chase for Bas Dost yesterday, the Portuguese reaction was quickly on the way.

We even wrote a quick story saying it would be unlikely for Ronald Koeman’s side to get the player for less than his release clause, which is €60m.

Things aren’t deviating much from that, and that’s basically the general feeling in the Lisbon outlets today, who find the transfer very unlikely for the winter market. 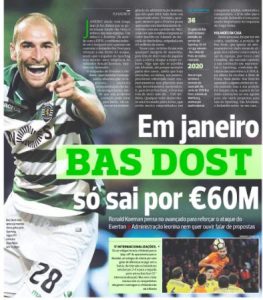 It’s A Bola who has the biggest article, claiming that there’s no way that Sporting would sell the player in the January window for less than €60m.

It’s claimed that any figures offered by Everton will be returned with a stamp saying “No!”, and the Toffees’ only way of getting him would be paying for the clause.

But Sporting don’t believe that the Premier League side would do that. Clubs are normally more cautious in the winter market and don’t usually spend that much money on a player, so the Lions’ experience in the transfer market says that Everton should wait this time.

Still, it’s big news in Portugal and A Bola have given the claims a full page on Wednesday, even if they find the whole thing unlikely.