Premier League side Huddersfield Town have reportedly just added a Portuguese official to the list of scouts who work for the club.

As reported by newspaper Record today, the Terriers have hired Fernando Matos to keep an eye on the country.

Matos reportedly has a background training Valadares’ women’s team, and was also a columnist for the very same Record.

Scouting the Portuguese league is a work which is constantly done by most of the Premier League clubs, and it’s no surprise that Huddersfield are joining the party. 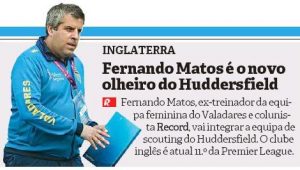 The club have already been on the list of scouts in at least two games in Portugal this season: Benfica’s Champions League clash against CSKA, and a cup tie between Paços Ferreira and Rio Ave.

At the start of the season, Huddersfield were also been linked to André Carrillo from Benfica, but the player ended up signing for Watford.

Only this summer, eight players left Portugal to join Premier League clubs, with another seven making their way to the Championship.