Portuguese side Sporting are interested in the signing of Huddersfield Town fullback Pipa, according to reports from Lisbon today.

Newspaper Record explains that the Lions have been searching for a right-back, and after failing in the negotiations for Braga’s Ricardo Esgaio, they now look for the next names in the list.

Sporting are currently ‘evaluating’ Pipa’s signing, and know he’d be a cheap option, since the player is available for only €2m.

It seems there’s still no decision on who the Lions’ target will really be, but as things stand, he’s well placed in the list options the Lisbon side have in their hands. 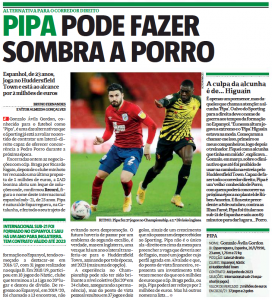 Record highlights the fact that he didn’t have a great campaign on a team level, since the Terriers were only 20th in the Championship, but the outlet points out hemanaged to make 37 appearances for the club in his first season.

He also had two goals and four assists.