Back on Monday, Portuguese newspaper Record featured a story claiming that Sporting are interested in signing Huddersfield Town’s Pipa.

It was said that the Lions are looking for a back-up option for the right-back position, and the 23-year-old is one of the names on their list, especially because he’d be available for only €2m.

It turns out that Record managed to speak to Pipa today. And the Terriers’ player had some good things to say about Sporting, admitting that a transfer would be possible.

“I saw the news, I know Sporting are the Portuguese champions and a great club. I even have a friend there, Porro,” Pipa told Record. 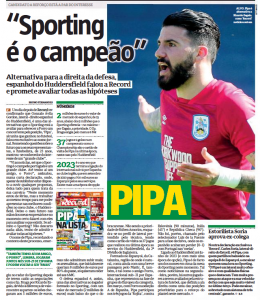 “Right now I’m on vacation, but working at the same time to be able to perform in the best conditions at my club, Huddersfield. I leave my future in the hands of my agents and at the right time I’ll talk to them to analyse what exists.

“I don’t rule out anything; in fact, I have to admit and evaluate all the hypotheses.”

Record writes once again that Pipa is one of the names who Sporting have ‘on the table’ for this transfer window. They highlight the fact that there are other players being evaluated by the club, so there’s no guarantee the Lions will try to make a deal with Huddersfield Town.

Now when speaking of his price, they refer to the €2m as his ‘market value’, instead of claiming he’d be available for that amount, like they did on Monday.