Ekstra Bladet report that Mathias ‘Zanka’ Jorgensen is very close to a move to Huddersfield Town. The Premier League new boys want to improve their squad ahead of the new season and have been working on a deal to sign Zanka from FC Copenhagen.

Following the potential transfer closely, Ekstra Bladet say they’ve spoken to a source close to Huddersfield who has told them the club will try to make a deal to sign Zanka. 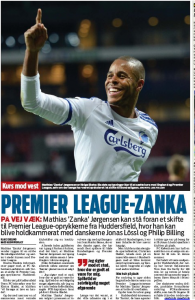 The Danish newspaper believe Zanka, Copenhagen’s captain, is on the verge of a move to the English club, and things are approaching a conclusion.

Whilst it had been assumed in the Danish media that Zanka would be leaving Copenhagen this summer, it was also assumed he’d most likely end up in the Bundesliga.

However, the chance of a Huddersfield Town move came to the surface a couple of weeks ago, and that’s now the likeliest outcome.

Wolves ready to submit €30m offer – With Mendes ready to...