On Tuesday English based reports stated that Fulham had waded into Steve Mounie’s likely Montpellier exit, and made an offer which would rival Huddersfield Town interest.

However, L’Equipe have a different slant in their Wednesday newspaper, explaining that what Huddersfield are offering is enough to please Mounie, and he’s turned Watford down to sign for the Premier League newcomers.

Fulham are mentioned, but only because L’Equipe say the club made a €6m offer for the player last summer, which Montpellier rejected. The French newspaper mention no new offer from Fulham.

Huddersfield are said to be close to winning the race for Mounie, having offered €12m, and then €13m for the player. 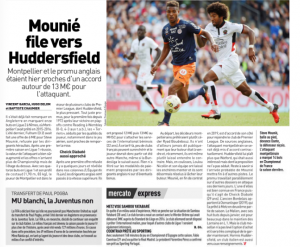 The deal isn’t done, but Huddersfield’s offer is described as being more pleasing than what Watford have put forward for Mounie. There’s still time for Fulham to come and ruin everything, but Huddersfield’s Premier League status could swing things in their favour.

Steve Mounie is a 22 year old striker, he scored 14 goals and added 3 assists for Montpellier in Ligue 1 last season.