L’Equipe has a big feature in its Tuesday edition focusing on what could hit Ligue 1 clubs before the close of the English transfer window on Thursday.

With the window ending earlier for Premier League and Championship clubs, although the latter can still loan players, it means there’s slight panic around Europe.

Clubs are expected to make moves before the window closes, but for any French clubs selling players at least they’ll then have time to replace them.

The French newspaper reports that Isaac Mbenza isn’t a player Montpellier have been keen to sell this summer, but things may have changed on Monday. Huddersfield Town made a ‘major offensive’ to sign the 22 year old forward. 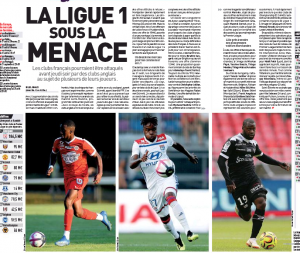 L’Equipe state that ‘with an offer’ of €15m plus a percentage of any resale fee, the transfer is ‘close to being concluded’. Although that would certainly suggest Huddersfield have made such an offer, it could also be stating that’s what the asking price is.

Mbenza scored 8 goals in Ligue 1 last season, playing mainly as a centre forward, but he can be flexible in his position.