Despite having a €40m release clause at Porto, Laurent Depoitre moved to Huddersfield Town in the Premier League for just €6m.

Bought by the Portuguese club after his great season with Gent, the now 29-year-old struggled to make a spot for himself in the team and rarely played.

Needing to get out of there as quickly as possible, the Belgian forward looked for a way out over the summer, eventually landing in at John Smith’s Stadium in a club favouring the target man approach of going forward.

In fact, he was so desperate to get out of his Porto nightmare that he didn’t really care where he ended up.

Speaking to Sport/Foot, he said: “I knew that if I found an agreement with a club, Porto wouldn’t stand in my way. What I really wanted was to go to England. Paradoxically to last year, I was ready to sign for an ambitious Championship side, and it took a blank season at Porto for me to get my chance to play in the Premier League, which hadn’t been the case 12 months before”. 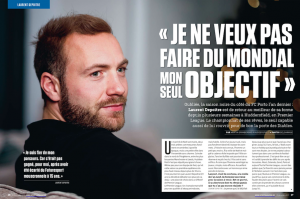 With all this happening in a World Cup year, it would be easy for people to jump to conclusions and state he didn’t want to fight for his spot in Portugal because he wanted to get into Roberto Martinez’s squad, but that isn’t the case.

He explained: “When I left Porto, I wasn’t thinking about Belgium. I was in such a complicated situation over there that I just wanted to find pleasure on the pitch again.

“After that, the national team obviously remains the Holy Grail, but I don’t want to make Russia my only objective. I’m too scared of being disappointed”.

Knowing full well that the likes of Michy Batshuayi, Christian Benteke and Romelu Lukaku are all ahead of him in the pecking order, the Huddersfield striker has come to terms he probably won’t be on that plane to the World Cup.

But he’s fine with that, as he’s now at a club that trusts him, and he’s repaying that with goals, scoring in his last two appearances, taking his tally to four in the season.