The situation surrounding Isaac Mbenza’s future is still a bit murky, but, for now, the young Belgium U21 international is at Huddersfield on loan from Montpellier.

Only making a handful of appearances for the Terriers so far, the 22-year-old is still adapting to the new league, trying to be as ready as possible for when David Wagner eventually turns to him more permanently.

Speaking to La Nouvelle Gazette in Belgium, Mbenza revealed his manager was pleased with how he’s going about things, and he isn’t too bothered about not playing regularly just yet, as he knew it would be difficult to break through straight away when he accepted the move.

In fact, it seems he’d say yes to the move all over again if he was sent back in time. 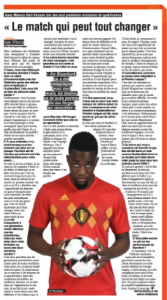 He said: “I think that in football, you need to know how to take risks. If you’re always in your comfort zone, you don’t progress. I could have stayed at Montpellier. I was guaranteed to play every week over there. I even could have renewed by contract.

“It was easy, I knew the country, the language, the team, but I got this chance to go up a level and I couldn’t let it slip away. It’s true I’m not playing a lot at the moment, but I’m in the best league in the world. It was a risk, I knew it, but I’ll only take stock at the end of the season, not before”.

Prior to his transfer to Huddersfield, Mbenza had been one of Montpellier’s more exciting players, scoring eight goals in 38 appearances in Ligue 1, showcasing his versatility in the process, playing either on the right-wing or through the middle.

There is a clause in the deal for the Terriers to make the move permanent, but its details aren’t very clear, as there’s no indication whether it’s compulsory or not.

Had it been, we’re sure it would have been mentioned somewhere.

If they do trigger it, however, they’ll have to pay Montpellier €12.5m.