David Wagner has never been one for sitting on the fence when speaking to the German media.

The Huddersfield Town manager is usually frank and doesn’t try to hide what he really thinks behind well structured answers which don’t really mean anything.

In an interview with SportBild this week he’s explained there’s ‘no chance’ the Terriers can aim higher than simply surviving in the Premier League, because of the club’s finances compared to the competition.

In the next part and the second part of Wagner’s interview with the German magazine, he was asked about his future. Several times a season, when a coach gets booted out of a Bundesliga club, the Huddersfield boss ends up in the news back home, usually one of several choices to take over.

There hasn’t been anything especially serious yet, but SportBild put Hoffenheim interest to Wagner and asked if he sees his future in English football: “The fact that I extended my contract was a clear sign that I am very well. In the coaching job, the three years that I am now in Huddersfield are already a long time.

“I cannot say if I will be there for such a long time. Longer planning is always very difficult in football. I don’t have a career plan. I never imagined that I would train the second team of Borussia Dortmund, or a team in England – certainly not in the Premier League. Therefore I am completely open for everything.”

SportBild weren’t going to leave it there, so asked Wagner how he feels about managing in the Bundesliga: “Of course, the Bundesliga is exciting. I was born and raised in Germany. I don’t want to exclude that. But if that doesn’t happen, I’ll still be a happy person.”

Then Wagner was asked: ‘You are the preferred candidate of Dietmar Hopp (Hoffenheim’s financial backer) for the succession of Julian Nagelsmann. Does that honour you?’

It’s already been announced that Nagelsmann will be taking over at RB Leipzig from the 2019/20 season, and SportBild clearly feel Huddersfield’s manager is a possibility.

The 46 year old certainly didn’t rule it out: “This at least shows that what I did in England has been seen in Germany.

“I was a junior coach at the Hoffenheim, as the club rose to the Bundesliga and was Herbstmeister (first midway through the season). I have to admit: At that time I didn’t know anything about what makes a good coach.

“But I found it remarkable that Dietmar Hopp was watching youth games in Zuzenhausen. On the occasion, we shook hands one or the other time. On top of that we don’t know each other that much yet. Since then we have got a house in Weinheim on the mountain road. At some point we want to return there.” 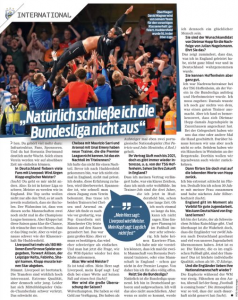 SportBild told Wagner, if that’s the case, then he should flirt back to Hopp, to which he said: “I am extremely bad at flirting. That’s why I’ve been with my wife for 30 years and have my silver wedding next year.”

Maybe this is all lining up for the manager to keep Huddersfield in the Premier League again before returning to that house on the mountain road.