At the beginning of April, a claim came from France to say Wolves had made a €42m offer for Morgan Sanson.

They’d already been linked with the Marseille player by Telefoot, and whilst the initial link seemed plausible, the offer didn’t. It was simply too much, especially for a first offer, perhaps double what would be expected.

Marseille website Le Phoceen then covered the story, stating the amount was way too high and suggesting the player’s real value this summer is €20-25m.

An unnamed agent was quoted as saying: “He’s a good midfielder, but I’m not sure he has the physical impact to really interest the Premier League clubs, it seems to me to be a very high price, even if the English are willing to pay sometimes disproportionate transfers.”

Then La Provence spoke to a member of the player’s entourage, who was able to confirm no such Wolves offer had been made.

Now not an undisputed starter at Marseille, the subject of a summer transfer has been brought up again, this time by L’Equipe. The claimed Wolves offer is mentioned, and it’s stated that’s already been denied. 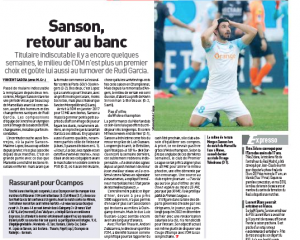 A source at Marseille is quoted as saying: “It is he who will have the most offers this summer. We hope at least €25m, why not €30m? He has the profile that pleases the Premier League.”

Wolves interest is quite possible, despite the offer claim being fake news.