After a few hitches slowed down the completion of the move, Filip Krovinović last week took a medical to complete his transfer to West Brom.

The 23 year old is joining from Benfica for the season, and taking a path well followed by other footballers at the Lisbon club. Thanks at least partly to how Wolves progressed, the Championship is seen as a serious league in Portugal, and not just dismissed as being a meaningless second division.

After joining up with West Brom’s preseason training camp in Spain, Krovinović has taken some time to speak to the Croatian media about his move… and he sounds absolutely delighted.

24Sata have a double page spread on Wednesday, and quote the midfielder as saying: “I am honoured and privileged that Slaven Bilic wanted me, and I consider this to be a praise for the work I have done. I do not feel pressured nor afraid of challenges, it is just motivation for further work.”

Norwich City had also been keen on the player, and it was explained in Portugal that Bilic was a big reason Krovinović was so keen to join West Brom.

There’s no way 24Sata could speak to a Baggies player without bringing up Goran Ivanišević, who is a fan of the club. They told Krovinović the tennis legend has compared him to Luka Modric, to which he said: “Thank you, if Goran really said that, then I have to give him a shirt, he deserves it. I know he’s a fan of West Bromwich and I believe we’ll be the best in the Championship, just like Goran was in Wimbledon.”

On how highly he rates the Championship, the Benfica owned player explained: “That’s what I was talking about with agent agent Marjan Šišić. Here are clubs like Swansea, Stoke, Fulham… we do not need to talk about how much they invest in the team. And it is also the fourth most glorious league in the world. The stadiums are full while the final match for the Premier League, which is played at Wembley, is more valuable than the 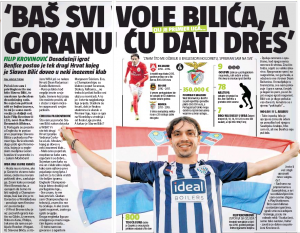 He’s certainly been doing some research.

24Sata make a point of saying what a good mood the footballer seems in, and ask how he’s found Bilic as a manager: “He works calmly and relaxed, with no nervousness or stress. He knows what he needs, he feels great experience. I talked to teammates, everybody praises him, and coach Dean Računica has impressed me. He participates in training, shows us everything and plays with us, the man is lightweight, so he could still play football.”