On June 21st, Tutto Mercato Web and De Telegraaf  talked about Ajax’s interest in signing Southampton’s Dusan Tadic, and it’s been reported in the Netherlands for some time.

Dutch newspaper AD reports the club have been working for weeks on landing the Serbian international this summer.

Ajax’s head scout Henk Veldmate and their new assistant coach Alfred Schreuder have played a key role in helping their side in making an approach for the 29-year-old.

Tadic views Veldmate as his football father, who signed him for FC Groningen in 2010. Having spent four seasons in the Eredivisie before joining Southampton in 2014, Ajax are trying to convince the player to return to the top flight club competition in the Netherlands.

“Honourable and proud” Tadic was open to the idea of joining Erik ten Hag’s in the summer transfer window. Once Ajax found out about this, they decided to step up their efforts.

The Dutch club’s manager remains hopeful his side can complete Tadic’s transfer. Ten Hag believes the Southampton attacking midfielder has the ability to become a top player at the Johan Cruijff Arena.

“Then you become more active and you bite into it. Hopefully it will come to signatures. What seems impossible, you should try to make possible. Ajax is also appealing across the borders. That may also play a role for him. We have told him what he can mean,”  Ten Hag was quoted as saying by AD. 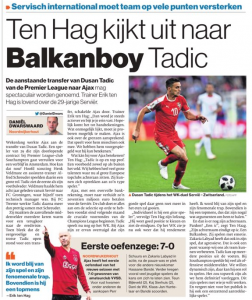 “Tadic is a top pro. An example both on and off the pitch. We have many great talents that already have major European top clubs behind them. He can go to become such a type of player.”

Tadic is representing Serbia at the 2018 World Cup in Russia. Ajax believe his form at the ongoing Fifa tournament will not “throw a spanner” in their efforts in signing the player.