Gent’s annoyance with the way Lille are trying to sign Jonathan David is becoming increasingly clear.

The Belgian club were left angered after David, their star player, granted an interview to L’Equipe and made it clear he’d fancy a move to Lille.

That then saw their chairman speak out about the situation publicly detailing his frustration at Lille going behind Gent’s back and turning David’s head. Leeds United interest was also confirmed, with Gent saying Marcelo Bielsa’s side had made a better proposal.

Tuesday’s edition of HLN looks at the situation and in a clear yet understandable snipe, they say L’Equipe ‘seems to be the ideal media partner for Lille’.

Should the Ligue 1 side ‘really want’ David then it’s stated they’ll have to part with €30-35m to get him. 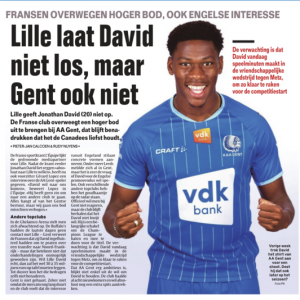 When it comes to Leeds, it’s again explained there’s been ‘concrete steps’, underlining the Bielsa interest is real, however, it’s also said that David being keen on the move is ‘highly questionable’.

Several other clubs are also keen, although they’re unnamed, and the possibility of David staying with Gent for another season isn’t ruled out.