Kevin Mirallas is once again being linked with an exit from Goodison Park, and this time the Belgian’s stay at Everton genuinely looks in danger. Mirallas has been linked with an exit throughout his Everton career, for a variety of reasons, and he’s again struggling to gain prominence.

Whenever the rumours appear, and there are several around at the moment, Mirallas’ salary demands pop up as an issue. Whilst it’s assumed Everton wouldn’t put a huge price on the player, it’s thought to be unlikely he’d take a big cut in wages.

And it’s the player’s terms which would be proving a real issue for Rennes. L’Equipe credits the French side with interest, but points out Mirallas earns a ‘too high salary’ at 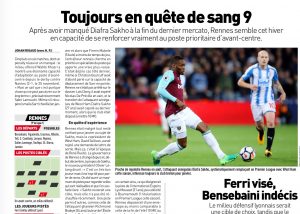 Everton, and that pretty much kills the deal.

So unless Mirallas would agree a big pay cut, which is unlikely, the only way he goes to Rennes is if Everton subsidise the deal in some way. Whilst there’s still said to be interest from elsewhere, Everton making such an effort seems unlikely.