Earlier on Wednesday, we covered part of an interview with Dennis Praet, who spoke about the differences between Serie A and the Premier League.

The 26-year-old, who admitted he was happier playing in England than he was in Italy, was joined this summer by Timothy Castagne, who arrived from Atalanta.

Also swapping Serie A for the Premier League, the right-back has taken to top-tier football on these shores like a duck to water, bagging two assists and a goal in his first six league games.

While that might have been a surprise to many who didn’t know him, it wasn’t for Praet, who always knew his national teammate would be fine.

He told Sport/Foot Magazine: “Players who succeed in Italy won’t always be good players in the Premier League, and vice versa, but in Timothy’s case, he was really made for the Premier League. For him, the transition was helped by the fact he has an above norm physical condition.

“He can run for 90 minutes without stopping. He’s a machine. So, it’s a league and role, on the right, made for him because he can be a windscreen wiper on his right-hand side. He loves it. He’s made for it”. 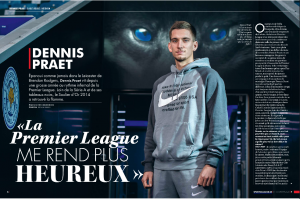 That’s exactly why Brendan Rodgers and his scouting team set their sights on the 24-year-old and pushed for over £20m to be spent on a position where they already had Ricardo Pereira, even if the Portuguese is currently injured.

The former Porto man is out with a ruptured knee ligament, but once he’s back, and Castagne returns from his hamstring problem, the Leicester manager could end up with some tough decisions to make.