Over the past few weeks, there has been an incessant belief that Antonio Conte could leave Tottenham at the end of the season and force his way to Paris Saint-Germain.

Despite the Italian manager publicly making it clear these were false rumours, Le Parisien continue to push the idea in an article on Tuesday in their print edition.

They repeat their information that the Tottenham manager ‘sees himself’ in the Parc des Princes dugout next season as Mauricio Pochettino’s successor, even if there are a few obstacles standing in his and the Ligue 1 club’s way.

To get a better idea of the manager himself, the newspaper decided to have a chat with Federico Balzaretti, currently the director of football at Venezia, about the Italian.

He made it clear that with Conte, it’s ‘the team that adapts to him, not the other way around’, which we are in the process of seeing at Tottenham. 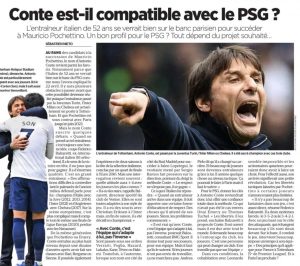 Spurs have certainly improved since the manager replaced Nuno Espírito Santo at the helm, and they are now close to securing Champions League football, which could all rest on their upcoming clash against Arsenal.

Balzaretti added: “He gives everything for his players, for his team, but they need to follow him. If the players don’t want to work, it won’t work. Andrea Pirlo says he changed his career, and many players have become managers thanks to him. He brings something on a tactical level. It could work in Paris, but you need to follow him.

“He takes liberties. He’s open, but he’s hard with everyone. He asks a lot from the club’s entourage, from the players. He’s a player who can change a club. He doesn’t just work on the team.”