This week’s France Football is dominated by a lengthy interview with Kurt Zouma.

The Chelsea defender has spoken about Jose Mourinho teaching him to hate losing a football match, and explained how Frank Lampard is very much hands-on in training, even taking the corners for defensive drills.

France Football put it to Zouma that Manchester United midfielder Paul Pogba has been very important in his career so far. The midfielder is 26 years of age, and the defender 25, and the pair have come through the ranks of French football together.

When speaking about his long term friendship, Zouma said: “Paul, he’s not a friend, he’s a brother. When I was on loan at Everton and Stoke, it didn’t feel far from home. We saw each other very, very often. I went to his house, he came to my house. When I was hurt, he was always there.

“We know his talent on the pitch, but it’s nothing next to the man he is in life. He is very intelligent. He bluffs me when I hear him speak all these languages. He is as good with his mouth as he is with his feet and his brain. He tells me a lot of things for my good. I am a discreet person, I keep my life in my corner. He says things, he does not deprive himself. He has given me a lot of advice since I was here. And me, in exchange, I advise him on the role of dad.”

The Manchester United player became a father for the first time this year, whereas Zouma already has three children.

Having taken advice from Pogba throughout his career, despite the pair being close in age, the Chelsea player is now at the stage where he’s dishing out words of wisdom to younger players at the club, and told France Football: “Yes I do. Today, I like talking and talking with the young people on the team. I’ve been in their place and I know we like it when a more experienced player comes to talk to you and advise you. So, I try to help them as best as possible.” 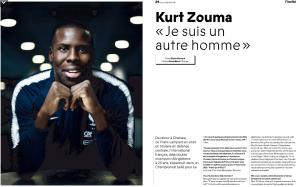 On the perception that he’s always in a good mood, much like his club teammate and compatriot N’Golo Kante, Zouma said: “I think I have the image of a very happy guy, always with a smile. Besides, my middle name is Happy. There is no mystery.”

Kurt Happy Zouma is certainly enjoying his football at Chelsea this season, perhaps to the greatest extent since he joined the club all the way back in 2014.