Despite struggling to recapture last season’s prowess in front of goal, Manolo Gabbiadini is slowly becoming an important player for Mauricio Pellegrino at Southampton.

Scoring both goals in a 2-2 draw against Newcastle a few weeks back, the 25-year-old forward has put the ball in the back of the net three times in 10 league appearances so far.

Hoping to have a good season in order to convince Gian Piero Ventura to include him in his 2018 World Cup squad, the Southampton striker also wants to help his club meet its goals.

Describing them in an interview with Corriere dello Sport as ‘remaining as close to the Europa League spot as possible while guaranteeing safety comfortably’, Gabbiadini also reveals he feels at home in the south of England thanks to his preparation ahead of the transfer. 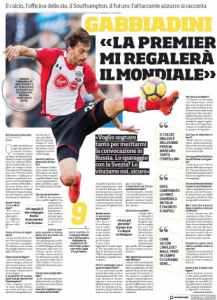 He said: “I was already ready. The negotiations took around a month. In the meantime, I read up on the city. I also got in touch with Graziano Pellè, who was at Southampton before me. He told me it was a beautiful city and the Saints were team filled with good people”.

While he’s happy, there are still a few things he misses from home.

He continued: “The food. Especially tortellini in broth. With the cold we have here, it would be really nice.”

Naming Manchester City as his favourites for the title this season, Gabbiadini was also asked about his teammates, and which one has impressed him the most so far.

He said: “Technically, Boufal. With the ball in his feet, he’s impressive. If he’d played five a side football, he’d be the Maradona of futsal.”

That’s quite the compliment.