Sander Berge appears to be heading closer and closer to signing for Sheffield United.

Earlier on Thursday we covered claims from a couple of Belgian newspapers, Het Nieuwsblad and Het Belang van Limburg, which made clear the Yorkshire club are getting closer to the Genk player.

HLN goes along similar lines. In their Thursday edition, the newspaper states Berge’s ‘head is already in Sheffield’.

There’s rough agreement between Genk and Sheffield United on the transfer, after the Premier League club substantially increased their offer.

HLN estimate the amount for the deal now goes between €20m and €25m, and it appears bonuses will play a role. 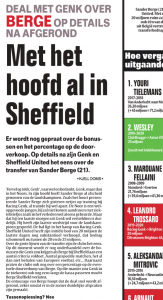 Those additional payments still need to be agreed, and Genk also want to agree a percentage of a future transfer fee, so they can profit again from the Norwegian when he leaves Sheffield United.

Genk’s desire to keep Berge until the end of the season is now thought unlikely to come to anything.