Home Europe “He would be welcome” – Liverpool player opens door for player to...
SHARE

Philippe Coutinho left Liverpool for Barcelona in January 2018 and after failing to make an impact at Camp Nou, was sent out on loan to Bayern Munich last summer.

The Bavarian club have an option to make the Brazil international’s transfer permanent, but various reports have indicated the Bundesliga winners are unlikely to exercise it.

Over the past few weeks, the 27-year-old has linked with a return to the Premier League and particularly to the Merseyside club.

Even though Liverpool chief executive Peter Moore has ruled out the possibility of the Brazilian returning to Anfield, Coutinho continues to be linked with the Champions League winners.

Jürgen Klopp’s side face Atlético Madrid in the knockout stages of the European competition and the Reds captain, Jordan Henderson spoke to Catalan newspaper Sport.

During the course of the interview, the England international opened the door for Coutinho to return to Liverpool.

“Phil is a good friend of mine. I think he is an exceptional footballer; he has everything, he has a great attitude and he loves football,” Henderson said. 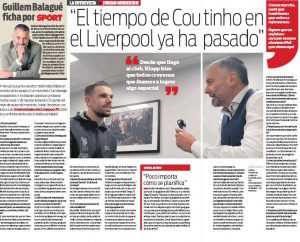 “So, of course, for me he would always be welcome, but it is not up to me. It is probably best to ask the manager that. The boys loved him, so if you ask any of them, I’m sure they’ll say they would love to have him back.”

“But I think his time here has passed, he has moved and I hope that in the near future we will see the same Phil we saw here.”