Wesley Moraes is yet to start a match since he suffered a serious injury in Aston Villa’s clash against Burnley in January 2020.

The striker was at the receiving end of a heavy tackle from Burnley defender Ben Mee, which resulted in the 24-year-old being stretchered off the pitch.

Wesley suffered a cruciate ligament injury and after spending more than 15 months away from the pitch, the Brazilian featured again for Dean Smith’s side back in April.

Aston Villa allowed the attacker to return to Club Brugge on a loan deal in the summer and he’s yet to make an appearance for the Jupiler Pro League side this season.

Het Nieuwsblad have a published a detailed interview with the South American, in which he was critical of the Burnley defender. The frontman even stated the incident which resulted in his injury wasn’t accidental. 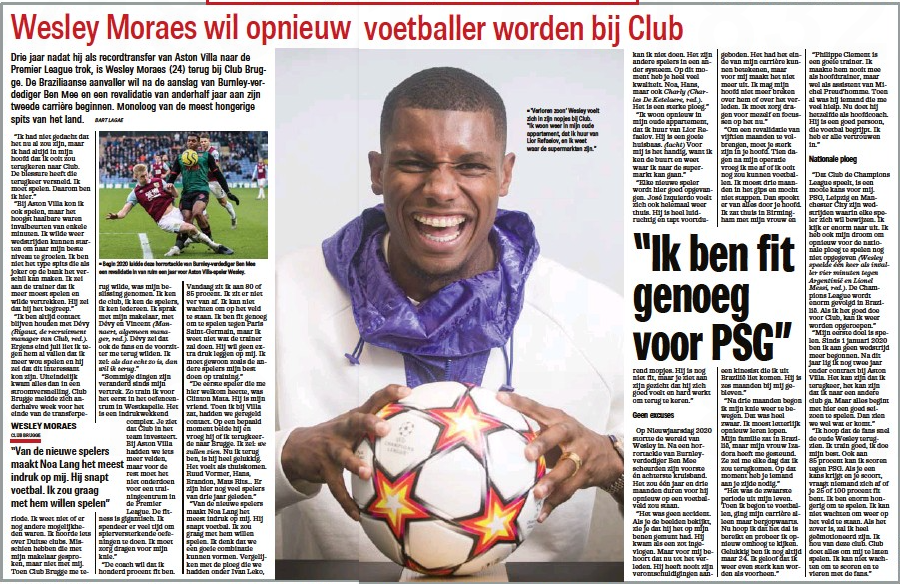 “It wasn’t an accident. If you look at the footage, you can see that he was after my legs. He flew in crazily. But for me, that’s a thing of the past. He never apologised,” Wesley said while discussing the incident.

“It could have been the end of my career, but it doesn’t matter to me anymore. I can’t break my head about him or the past anymore. I need to take care of myself and focus on the present.”

The Villa owned striker admitted he had doubts over playing professional football again and also detailed the challenges he had to face during rehabilitation.

“To complete a 15-month rehabilitation, you need to be strong in your head. Ten days after my surgery, I wondered if I could ever play football again,” Wesley explained.

“I had to wear a cast for three months and couldn’t walk. There’s a lot going on in your head. I was at home in Birmingham with my wife and a physiotherapist who I brought in from Brazil. He stayed with me for six months.

“After three months, I started to move my knee again. That was very hard. I literally had to learn to walk again. My family was in Brazil, but my wife Izadora supported me. She told me every day I’d come back. In that moment, you need someone by your side.

“It was the hardest period of my life. When I started playing football, my career only went uphill. Now I hope the valley has been reached and I try to look up again. Fortunately, I’m still only 24. I believe I can regain my strength as before.”

Southampton seem ‘most interested’ in midfielder – Player ‘will have to leave’, club want €10m

“Like to see him at Manchester United” – Coach says interest...

Southampton seem ‘most interested’ in midfielder – Player ‘will have to...

Hope Aston Villa player can ‘force the issue’ and push for...