Juventus defender Mattia De Sciglio has revealed he has a ‘soft spot’ for Chelsea.

The 28-year-old is currently on loan at Lyon and has made 28 appearances in the league this season.

Rudi Garcia has used the Juve owned player as a right-back, left-back and central defender at the Ligue 1 side.

The Italian international’s current deal with the Old Lady will expire in 2022, and to discuss his future, he gave an interview to Tuttosport.

De Sciglio has expressed his desire to either continue with the French club or make a switch to the Premier League, where he has given preference to Thomas Tuchel’s side.

“I would like to stay in France, where I feel great on and off the pitch, or try a new experience abroad,” the 28-year-old said.

“Maybe in the Premier League which has always fascinated me and where I have a soft spot for Chelsea. Now, however, I only have Lyon and finishing the league in mind.” 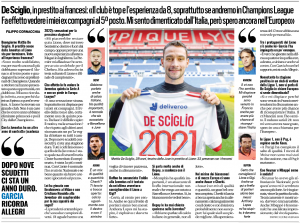 For now, the former AC Milan man has publicly spoken about his admiration towards the west London club and has opened the door to move to England.

De Sciglio’s ability to operate in various positions could provide Tuchel more options next season, if Chelsea decide to sign him in the summer.