If you were asked to compare Southampton to a Bundesliga club, which would it be?

It probably depends on how the season is going.

Asked by Kicker to rank the Saints, manager Ralph Hasenhüttl chose a comparison with the 12th best team in Germany so far this campaign: “This is not disrespectful, on the contrary, but I think we are like SC Freiburg in Germany. We do not have the big financial resources like many Premier League clubs.”

All that has made his task at the club even harder. Following Mark Hughes, the Austrian has been tasked with saving Southampton from the drop, whilst at the same time improving the style of play.

Kicker asked how the team have reacted to the change in style, and whether the players have been receptive: “Every colleague goes with his approach. It is always important that you succeed quickly with what you propose. Then the players follow one another.”

For that, it’s important to have leaders in the team, and Southampton have a couple in Oriol Romeu and Pierre-Emile Højbjerg.

They’ve both played in the Bundesliga, and Hasenhüttl was asked his opinion on them and Jannik Vestergaard: “Jannik had an unfortunate star and was very solid afterwards. Pierre is the captain and not without reason. And Oriol is hugely important, even for our game without the ball.” 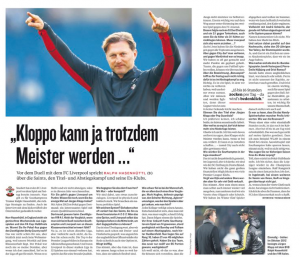 Southampton are currently 16th in the Premier League, and five points clear of relegation. Should they survive, then there’s likely going to be much more optimism around a more Hasenhüttl-styled team next season.