Finland managed to win 2-0 against France in an international friendly tie on Wednesday and it was their first ever win over the World Cup winners.

The French media aren’t pleased with their players’ performances and have been critical when reviewing Les Bleus’ latest defeat.

Brentford striker Marcus Forss, who made his debut for Finland, scored against the run of play to help his country take the lead in the 28th minute.

The visitors capitalised on the Spurs midfielder’s mistake as his failure to retain the ball after receiving it from Clément Lenglet allowed Finland to open their account.

Sissoko lost the ball on several occasions in the first half and L’Equipe states that ‘illustrated his difficulties’. His initiatives have ‘often resulted in losing the ball’, and created only a handful of chances. 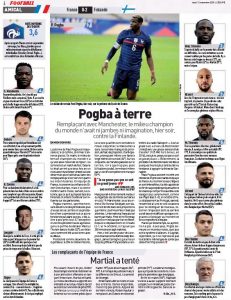 France Football have also rated him 2/10 and stress the Tottenham player gave away the ball on nine occasions in the first 45 minutes.

France Football believe the former Newcastle United man had ‘too much technical guesswork’ and ‘hardly any offensive impact’ in Paris.