After seven successful years at Celtic Park, arriving for less than £1m from CD Motagua in Honduras in 2010, Emilio Izaguirre’s time in Scotland came to an end last summer.

The 31-year-old had only made 18 appearances in all competitions under Brendan Rodgers during the 2016-17 season.

Then, instead of staying in Europe, which he could have done, he decided to go to Saudi Arabia, where he’s currently playing for Al-Feiha.

Speaking to Diario Deportivo Diez in his home country, the left-back explained his reasons behind his exit from Celtic Park, and how they had nothing to do with the team. 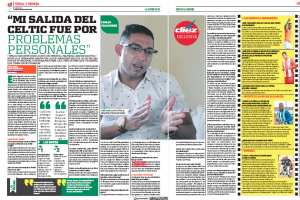 He said: “They’re very difficult things to talk about. There will be a day when I will talk about my departure from Celtic. I don’t want to because it was due to personal problems that I had with agents in England, and that’s why I left.

“It was hard for me to leave. Brendan Rodgers got angry with me because he counted on me, and I found myself with this guilt of leaving, but I left the door open there, and you don’t know what will happen tomorrow. We had a hard time with my wife and children because of personal things that happened to us.”

We doubt a return will be on the cards for the 31-year-old, but as he said, crazier things have happened in football.