Home Championship “Hard to forget” – Karanka on how special Middlesbrough was – Relationship...
SHARE

Aitor Karanka is still warmly remembered at Middlesbrough, following his time with the Championship club.

The Spaniard moved there in November 2013 and whilst it wasn’t all a march to the top, Karanka managed to get the club promoted to the Premier League.

A poor campaign and disagreements with players and board saw him leave Middlesbrough in March 2017, not believing he was the right man to try and take them forward.

Since then he’s had a spell at Nottingham Forest and has been out of a job since January. That’s been a period for him to relax and do all the things that are impossible when manager of a Championship club.

Speaking to Marca this week, Karanka was asked about his time at Boro, and clearly feels very warmly about that period of his career.

The 45 year old told the Spanish newspaper: “I got there and wanted to return the trust that they offered me from the beginning. Having that relationship that I have with Steve Gibson, seeing that he supported me in everything… There will be more promotions, hopefully, but the sensations that I experienced during those two and a half years in 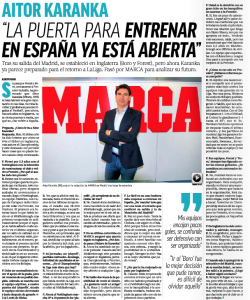 Middlesbrough are hard to forget. A team that flirted with the decline to League One went on to compete with the best of the Premier League.”

Asked about the year in the Premier League, and whether Middlesbrough were lacking incoming transfers that summer, which would have made it easier to compete, Karanka told Marca: “The goal was to stay and compete with the lowest budget against the biggest teams in the league. It was a shame. We made the best possible signings. We throw away a Negredo or Valdés, who helped us a lot. It was competed against everyone.”