Belgium will make a trip to Laugardalsvöllur as they face Iceland in the UEFA Nations League on Tuesday evening.

On September 10th, Roberto Martinez was talking to the media during the pre-match press conference and the former Wigan boss spoke about Everton’s Gylfi Sigurdsson, who is likely to start against De Rode Duivels.

The 29-year-old has spent the majority of his club career in England, and before joining the Merseyside club in 2017, he played for Reading, Tottenham Hotspur and Swansea City.

Prior to the two nations’ clash today, the 45-year-old coach talked about the Everton player’s unique characteristics that made him follow the Icelandic star’s progress over the years.

“Gylfi is a very good player and I had been closely following him for a long time. He did well at Reading, passed through at Tottenham, where he had to adjust and then he went to Swansea,” Martinez was quoted as saying by Gazet van Antwerpen.

“Everton paid €50m for him. Then you should not add much more, I think. He plays very well vertically, assists, plays well between the lines… Such players are hard to find. He gives everything in probably the hardest league in the world, the Premier League. Then you know how good he is.” 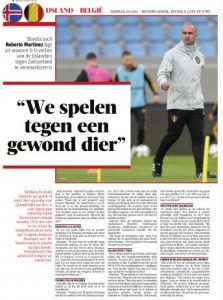 Martinez guided Belgium to a third place finish at the 2018 World Cup and the Spaniard will be hoping to start the first competitive fixture since the FIFA tournament with a win.