Italian newspaper Tuttosport had a nice story over the weekend about Odion Ighalo and his quick success at Manchester United.

The article describes the 30-year-old’s childhood dream of playing for the Old Trafford side, which is now fulfilled following his four goals in eight appearances for the club.

The outlet managed to interview the striker’s agent, Patrick Bastianelli, who’s clearly really proud of how things have been going in his career.

“Odion is reaping what he deserves after many sacrifices, after many years around Europe. Manchester is a prize for everything he’s shown in recent years,” Patrick Bastianelli told Tuttosport. 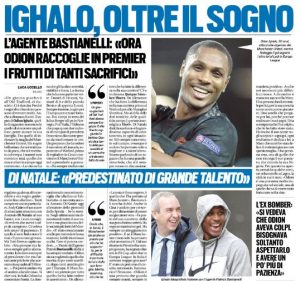 Ighalo has been getting a lot of compliments from the European media for proving to be a player with a lot of dedication and passion, and his agent agrees with it.

“It’s part of his character, of his great seriousness. He scored many goals. He always has a positive attitude.”

That’s why the representative says Ighalo has no regrets, despite his spells in Italian and English football which haven’t been as successful as his time at Old Trafford has been so far.

“Odion is a person who always looks ahead, always in a positive way.”

On Ighalo’s first goal for Manchester United, the agent says: “It was also exciting for us to see his reaction, the happiness in his eyes. Couldn’t believe it…”