Home Europe More than half of 100K+ fans vote against signing of Manchester United...
SHARE

When Marca do a poll, they do a poll properly.

Asking a few hundred people something on Twitter is leagues beneath them. When it comes to polls, they’re near the top.

Asking fan opinion is a big thing in Spain and it means more than in some other countries. Clubs have elected presidents and if the will of supporters is continually gone against, then re-election is clearly in danger.

For Paul Pogba today, none of this is very good news, especially if the midfielder is still keen to swap Manchester United for Real Madrid.

Marca have asked more than 100,000 fans, most of which will be Madrid followers, if it’s 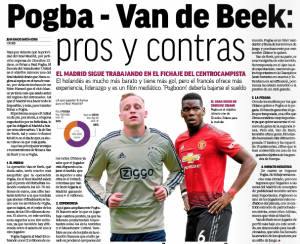 66% went for the Dutchman, and 34% for the Manchester United player.

The Spanish newspaper go over the pros and cons of each signing, with Pogba winning for experience and branding, and the Ajax man coming out on top for value and ease of the deal. 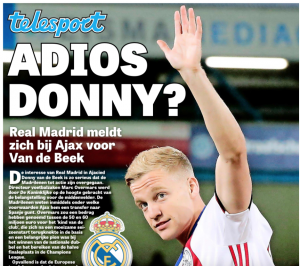 Marc Overmars is said to have told them the price is €50-60m, which is even cheaper than Marca thought.