Eric García has a year left on his contract at Manchester City.

Following City’s latest win over Newcastle United, Pep Guardiola admitted the Citizens’ desire is to retain the centre-back for “many years”.

The 19-year-old arrived in Manchester from Barcelona in 2017 and the La Liga winners are now keen on bringing the defender back to the club.

Barca’s interest in the teenager has been covered in both Catalan newspapers today.

Mundo Deportivo journalist Miguel Rico takes a look at the comments made by Guardiola on García, and from that, he has inferred there has been no talks between the two clubs for the Spaniard.

He claims the Camp Nou side have started negotiations with the player’s agent and they are of the belief García wants to return to his former club. Rico also adds a deal can be concluded for a reasonable fee, which is believed to be between €7-10m. 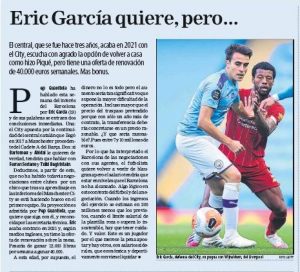 Last week, the British press reported City’s renewal offer includes a raise in the salary from £12,000 to £40,000 per week. This has also been relayed by Mundo.

Rico says the renewal offer, which includes a significant rise in the wages could make the operation ‘more difficult’ for Quique Setién’s side because they cannot match it.

Sport, on the other hand, have a slightly different take when it comes to discussions between the two clubs.

They state Barcelona have ‘already contacted’ the Premier League side to ‘communicate’ their interest in García. City’s desire is to not let him leave, but it all depends on how the negotiations [most likely about contract talks] will evolve.

It’s claimed the Etihad club’s renewal offer for the player has been on the table for several months, but Barca’s interest has put the negotiations on hold.

According to Sport, the Blaugrana’s interest in García has not gone down well with the City coach.

Guardiola’s ‘main fear’ is losing the Spain U21 international and he ‘wants to stop’ the player from leaving the Etihad, which is why the manager is ‘trying to prevent’ García from escaping City. 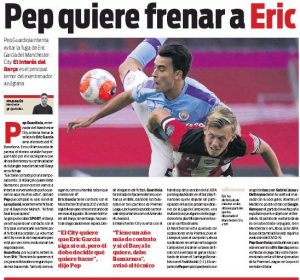 To sum up both the reports, García is willing to return to Barcelona, provided they offer him the same salary City are planning to offer through a new contract.

The English club, on the other hand, want to secure García’s long-term future and this is also the wish of their manager.