Frenkie de Jong is everywhere in the Spanish media right now, and one thing is clear: Barcelona’s confidence that they had the deal in their hands is beginning to shake.

For months the Catalan media have been repeatedly explaining that De Jong wants to play for Barcelona and is eager to be on the same team as Lionel Messi. This was seen as crucial in any deal, and it was even suggested, more than once, that Barca could pay a cheaper fee than others because of this situation.

Even the Catalan pair of Sport and Mundo Deportivo are wobbling a bit, and Marca, more Madrid leaning, explains the club now faces an ‘uphill battle’ to sign the Dutchman.

PSG are said to have already put €80m ‘on the table’ and that is a problem given Barcelona were looking at paying €50m.

Manchester City are also a major problem, and Marca say the Premier League champions are trying to get the player on their side: ‘in this sense Guardiola is very persuasive’ 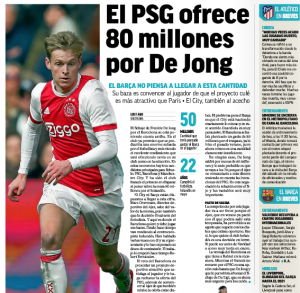 The Spanish newspaper believe the transfer fee will be around €70m, which suggests they don’t think PSG will win the day.

It could now be a straight charm offensive between Manchester City and Barcelona, with the English club hoping Guardiola’s persuasion can override the attraction of playing alongside Messi.